Zagorochoria is the name given to the sparsely populated 46 traditional stone and slate villages of ZAGORI, high in the Pindos mountains of north-west GREECE. Here, just south of the Albanian border, the villagers are returning their homes and communities to former glories from Ottoman times, with pride and with integrity.

To meet local people, immersing ourselves in the landscape and culture so that we could produce short films and narrative stories that would begin to give the outside world a window into this enchanting but little known area.

The history and people of Zagori.

Zagorochoria is the name given to the sparsely populated 46 traditional stone and slate villages of ZAGORI, high in the Pindos mountains of north-west GREECE. Here, just south of the Albanian border, the villagers are returning their homes and communities to former glories from Ottoman times, with pride and with integrity. 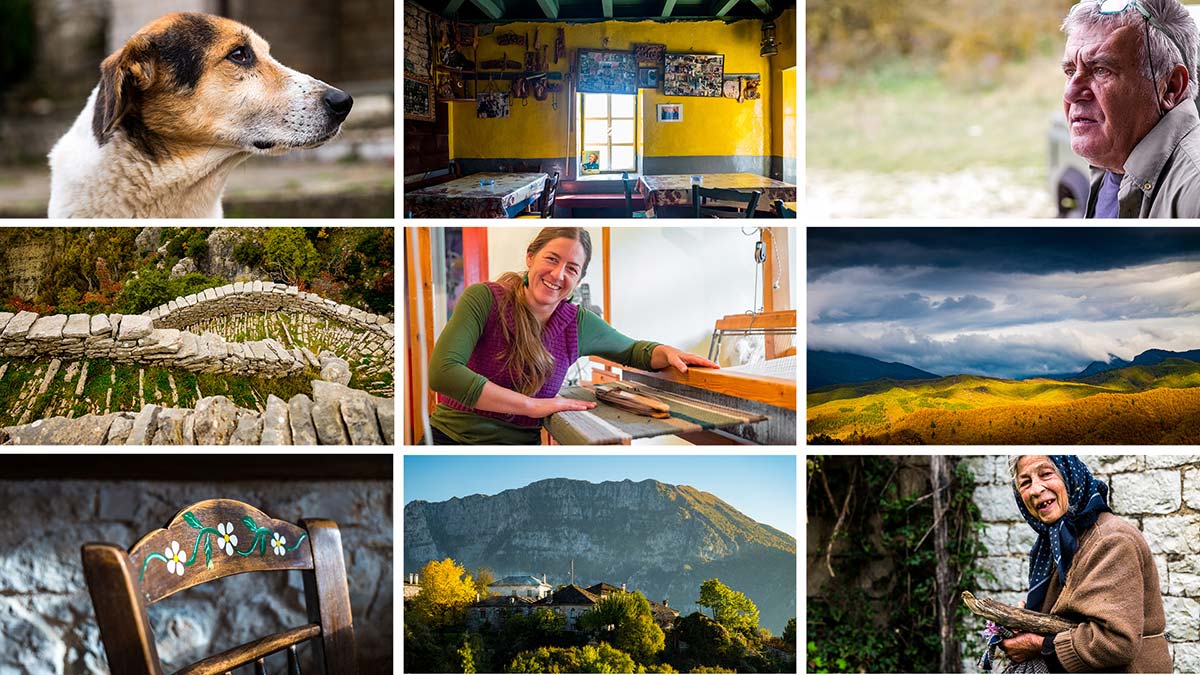 A group of friends and family visited Zagori with us. We stayed with Giorgos at his beautiful Papaevangelou Hotel, swam and rafted in the icy cold Voidomatis water way down in the Vikos Gorge, and hiked up to the mystical Dragon Lake.

This film gives a glimpse of what we did and how the magic of Zagori, and the kindness of its people, surprised and delighted everyone who was there, and left a lasting impression.

Meet Evripidis, owner of a tiny traditional kafeneio in the Zagori village of Elafatopos.

A kafeneio is much, much more than a bar, he explains. This is where the local community meet to drink coffee and tsipouro, and to talk about politics, sitting ‘in the round’ rather than with their backs to each other.

Giorgos - "George" - Papaevangelou grew up in Athens, but always felt emotionally attached to Zagori. His father, now 88, was originally from the area, and used to bring George here during the school holidays.

"My wife and I, we decided to change our way of life", says George quietly, sitting on a stone wall in the grounds of the hotel that bears the family name. Behind him, the late autumn sun peeks through the jagged golden teeth of the Tymfi mountain range, high above the iconic Vikos Gorge.

"We started from scratch. There was no building here before. We bought stone and materials from around Zagori, from 130 year-old homes, to make the hotel look old and to fit in with the rest of the village. Fortunately, my father knew about construction."

Lena has her own loom, giving weaving lessons to guests and to locals. She produces beautifully crafted and brightly coloured blankets, wall coverings and table mats for Rokka.

Kostas tends 400 sheep and 50 goats, together with chickens, turkeys and a few rusting old motor vehicles, on the sprawling farm in the nearby valley of Soudena. Visitors at the guest house reap the benefits of his labours, with milk, cheese, eggs and yoghurt arriving on their generously laden breakfast plates.

Lena describes Zagori as "wild and untouchable." But through Rokka, she, Kostas and Kostas's family are providing the perfect, authentic and sustainable way for visitors to share their own special bond with this fascinating area.